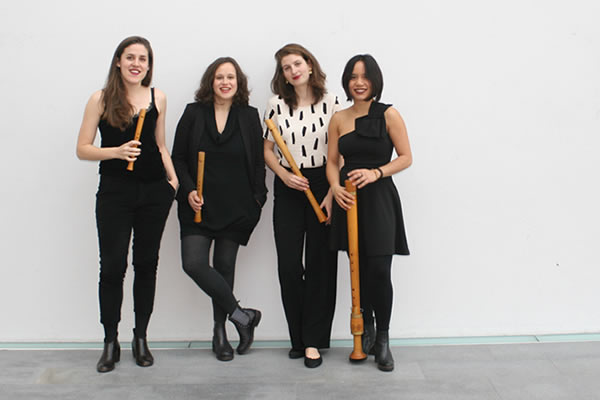 The four recorder players met in Dorothee Oberlinger’s recorder class and studied together. In addition to their ensemble work, the musicians are also succesful soloists, being award recipients at the German Music Competition (“Deutscher Musikwettbewerb”) and the International MOECK Solo Recorder Player Competition in the United Kingdom. Despite the fact that the focus in their respective artistic careers differs, they share a love for ensemble music. The musicians’ different interests are mirrored in the unusual programming of the quartet and their use of a range of different recorders. New and ancient music as well as arrangements of works belonging to entirely different genres (such as choir music) make it possible for the musicians to creatively engage with the possibilities provided by four recorders. Besides evergreens and major repertoire pieces, they make rarely performed works come alive in their concerts. In addition, all four musicians also work as teachers and educators in a range of areas relating to the recorder. It therefore does not come as a surprise that children’s concerts and arts and culture mediation play a crucial role in the artists’ work. In this field, they developed (among other things) the project “Wo die wilden Flöten flöten” (“Where the Wild Recorders Are”) with Monika Sigl-Radauer as a moderator, which was performed multiple times in the children’s concert series “Lauschkonzerte” (“listening concerts”) initiated by Stiftung Mozarteum (the last performance was in June 2016).

In 2018, the quartet formed part of the Jeunesse Austria programme for young audiences with two projects, “Wo die wilden Flöten flöten” and the evening programme “Airlines between then & now”. Another programme for the evening, “Mythos Flöte” (The Myth of the Recorder), is bookable through the contact form on this website

More information about the ensemble at https://www.windcraftquartet.com/