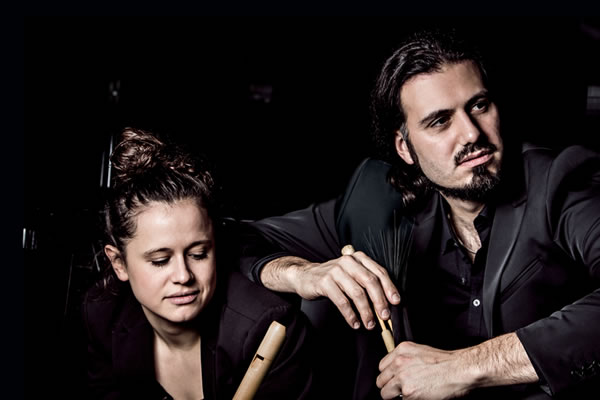 Virtuoso, unconventional, and brimming with the joy of playing – that is how Anne Suse-Enßle (recorder) and Philipp Lamprecht (percussion) present themselves in front of their audience. Always on the lookout for new and offbeat ideas, they take their audiences on journeys into the manifold soundscapes of our present. With a seemingly inexhaustible array of various recorder and percussion instruments, the duo focusses on the most recent contemporary music as well as music from the Middle Ages.

Formed in 2008 in Salzburg, the ensemble specialises in performing contemporary works as and sound installations as well as medieval music (dances, troubadour songs, and religious music of the time). Every once in a while, the musicians commission new compositions. Workshops at music universities in Austria and Germany are also part of both musicians’ activities. Moreover, Anne-Suse Enßle and Philipp Lamprecht also compose their own musical pieces.

Recent projects include a number of children’s concerts in collaboration with Stiftung Mozarteum Salzburg and PODIUM Esslingen as well as a complete performance concert series of the 14th-century minstrel “Mönch von Salzburg”’s oeuvre. For this concert series, the duo is accompanied by a larger ensemble consisting of singers and instrumentalists (partners include the International Paul Hofhaymer Society Salzburg and others).

In 2012, the ensemble was awarded a Start Scholarship by the Austrian Ministry of Education.
CDs: POINTS OF CONTACT (2010) unimozarteum, jeuX (2012) sumtone, TESSERAE (2017), audax records
www.enssle-lamprecht.com